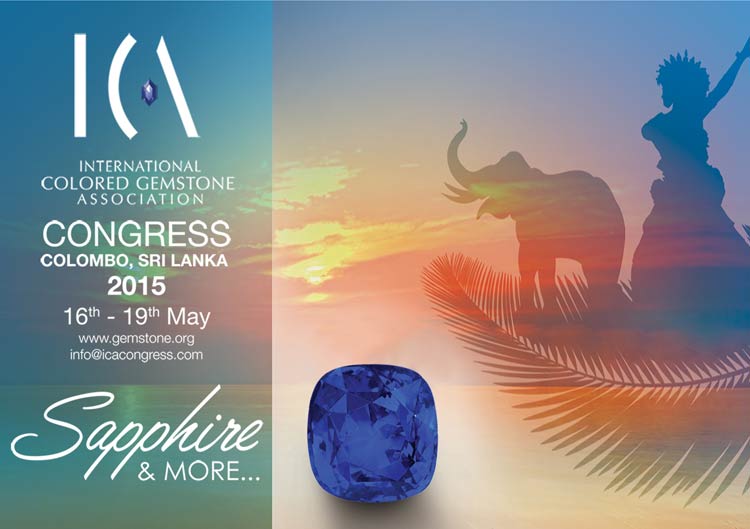 The International Colored Gemstone Association (ICA) confirmed that its next biennial gemstone congress will be held in Colombo, Sri Lanka from May 16 to 19, 2015.

The venue and dates were confirmed at an ICA Board meeting held during the Tuscon Gem Shows in Arizona in the United States.

Sapphires will be the focus of the congress and more than 300 international delegates representing the global coloured gemstone industry will gather in Colombo for the celebrated event the association’s 16th congress since its inception in 1984. The Congress will be held at the Cinnamon Grand Hotel in Colombo.
ICA Director, Dr Gamini Soysa says the choice of Sri Lanka as the venue for the congress and sapphires as the theme underlines the importance of both the country and its amazing gem resources in the international gemstone business.

Dr Soysa said a highlight of the event will be the pre-congress tours to the renowned sapphire mines in the Ratnapura and Elehera areas as well as tours to the ancient cities of Sigiriya and Kandy.

Chairman of the Congress committee is former ICA director M.H.M Imtizam. The joint partners for organizing the congress are the Sri Lanka Gem and Jewellery Association and the Government’s National Gem and Jewellery Authority (NGJA).

ICA’s ambassador for Sri Lanka, Altaf Iqbal, is confident that the ICA congress will be an important platform for the promotion of Sri Lanka’s famous Ceylon sapphires and the dozens of other gemstone varieties produced here.

The last occasion that Sri Lanka hosted the congress was in 1987, just three years after the association was formed. Since then there has been a phenomenal growth in sapphire demand, primarily fueled by a massive growth in demand from consumers in China.

ICA is a non-profit organization, specifically created to benefit the global coloured gemstone industry. Founded in 1984 the association now has over 600 gemstone dealers, cutters, miners and retailers from 47 countries who are devoted to advancing and promoting the knowledge and appreciation of coloured gemstones.

Among its key objectives is to promote the understanding, appreciation and sale of coloured gemstones throughout the world; address technical and promotional issues related to coloured gemstones; research, create and/or subsidize incentives for scientific solutions to gemstone problems; facilitate closer international communication among all players in the industry from miners, cutters, and dealers to manufacturers and retailers and maintain and perpetuate ethical standards among members.

Among the numerous reasons for selecting Sri Lanka as the venue for the 2015 Congress of the International Colored Gemstone Association (ICA) is the country’s importance as a significant gemstone source (within the trade) for sapphires as well as a whole spectrum of gemstone varieties, ICA president Benjamin Hackman affirms.
In an interview, Mr Hackman says sapphires are the best-selling coloured gemstone worldwide (in value terms) and Ceylon sapphires are very popular. ”If you are a sapphire dealer and you need to buy sapphires, you have to go to Colombo. This is true for our company too.” His company Intercolor in New York specializes in sapphires as well as tanzanite.
He confirms that Sri Lanka is not just a source for sapphire from its famous gem gravels but processes material from other sources such as Madagascar.
At the same time Sri Lankan dealers have been requesting to host a congress in Colombo and the government too is lending its co-operation and support. “So all in all we are confident that Sri Lanka is the best choice.”
What is really encouraging is that the industry in Sri Lanka is now putting in a lot of effort to deliver a great congress: former ICA director, H.M.H Imtizam and current director, Gamini Soysa have garnered cooperation of the industry and government agencies and are working towards producing the “best-attended congress ever.” “Given the draw of Sri Lanka and its important position in the market, we are confident that this will happen.”
Promoting colour
Promoting colour is ICA’s main task: “it is fantastic that colour is now a best seller.” He says an important change is that some large jewellery retailers with multiple points of sale have moved from diamond-only inventory to colour. For example in the US a large chain store has made a major shift to colour. Similarly in China, the fastest growing consumer market for jewellery, one of the largest retailers with more than 2,000 stores is adding more variety of colour to their inventory.
Colour has become a firm staple among consumers and Sri Lanka is an important supplier to this demand. Mr Hackman says that among trade issues of importance for members is the adherence to the rules set out in the disclosure manual for gemstones. The Congress will urge members to follow these rules and consider penalizing those that don’t.
Among congress events the mine tours will be important for dealers to learn more about the mining practices in Sri Lanka. The Gem show being planned by the host country will also be a big draw. We have had similar shows during other Congresses and it is now almost routine to have a show.

The ideal ICA congress outcome? Mr Hackman says the main outcome is to add knowledge, transfer information and increase education and experience for members. ICA Congresses are an exchange of ideas in a relaxed, easy ambience. Congresses are a well-established event and are well attended: many people come from all over the world just to take part in the amazing experience of a congress which is a sort of wonderful vacation with a lot of opportunities to network and make new business friends while having a good time. “In my opinion, the most important outcome is the friendships that are developed and nurtured at the congress. This is truly priceless.”