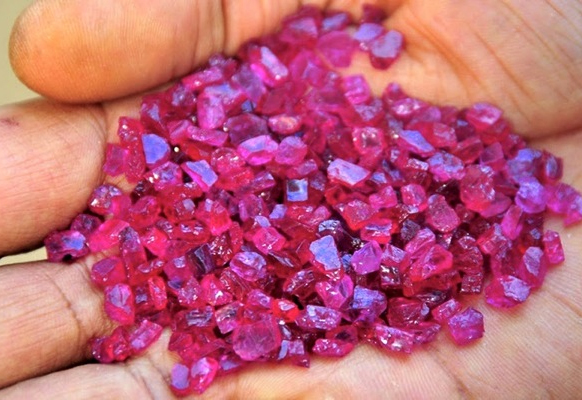 An exceptional 40.23-carat rough ruby from Montepuez. This ruby, which was named ‘Rhino Ruby’ by Gemfields, was sold at the Singapore auction

Gemfields’ auction of predominantly higher-quality rough ruby extracted by Montepuez Ruby Mining Limitada, in which Gemfields has a 75 percent interest, from the Montepuez ruby deposit in Mozambique generated $43.3 million in sales – the highest-ever achieved at any Gemfields auction.
The auction was held in Singapore from December 3 to 8, and marked Gemfields’ second auction of rough ruby.
Of the 85,491 carats offered, 62,936 carats (74 percent) were sold, with an average realised price of $689 per carat – the highest achieved at any Gemfields auction, the company said. Fifty companies took part in the auction.
The two Montepuez auctions held since June 2014 generated $76.8 million in aggregate revenues.
Given the focus on higher-quality rubies at the auction, all lots were offered on an untreated basis, in contrast to the June auction, where Gemfields offered both untreated and treated material, with all of the treated lots being offered using industry-accepted treatment techniques and on a fully disclosed basis, the company said.
The overall diversity of auction attendees increased noticeably with Austria, China, Germany, India, Israel, Japan, Sri Lanka, Thailand, the UK and the US all represented. Refinements made to Gemfields’ pioneering grading system for rough rubies since the June 2014 auction were “widely acclaimed” by auction participants, the gemstone producer added.

In November 2014, Gemfields announced that an exceptional 40.23-carat rough ruby from Montepuez would form part of the December auction. The ruby was successfully sold, with the price remaining undisclosed given the principles on which Gemfields’ auctions are conducted.

In recognition of the successful sale of this exceptional ruby, dubbed the “Rhino Ruby” given its size and characteristics, Gemfields has committed to supporting the anti-rhino-poaching aircraft operated by Game Reserves United, thereby contributing to a material proportion of its flying costs for the 2015 calendar year.
The proceeds of this auction will be fully repatriated to Montepuez Ruby Mining Limitada in Mozambique, and with all royalties due to the Government of Mozambique being paid on the full sales price achieved for these rare gems at auction, Gemfields said.
At 30 September 2014, when Gemfields last provided a quarterly production update, total ruby and corundum extracted at its Montepuez mine since the commencement of bulk sampling stood at 11.3 million carats.
The next Gemfields auction of material from Montepuez will be of predominantly lower-quality ruby and corundum, and is presently expected to take place before June 30, 2015.
Commenting on the auction results, Gemfields CEO Ian Harebottle said, “The Montepuez ruby deposit, coupled with Gemfields’ transparent and well-regarded auction platform, have had an indelible and positive impact on the global ruby market and we look forward to participating in the continued growth of this industry. Customer response has been overwhelming, underscoring the potential for the Gemfields model.
“I am very pleased that the sale of our exceptional 40.23-carat African ruby will assist in countering rhino poaching. Due to the size and character of this ruby, and the sheer magnitude of the challenge of protecting African rhinos, my colleagues and I have named it the ‘Rhino Ruby’ and we look forward to following its progression from its current rough form all the way through to a faceted gem and finally being set in a magnificent piece of jewellery.

“The three auctions we have hosted so far this financial year, two of emeralds and one of rubies, have yielded aggregate revenues of $94 million, a superb performance for Gemfields which every member of our devoted and disciplined team should be deservedly proud.”