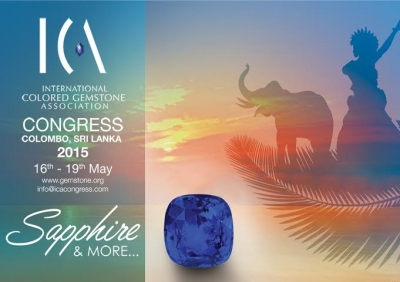 Over 400 global members of the International Colored Gemstone Association including the President of the Association Benjamin Hackman are scheduled to participate in the 16th Congress which is to be held in May from 16th to 19th, 2015 at the Cinnamon Grand Hotel.

CA Ambassador to Sri Lanka, Altaf Iqbal cited the objective was to host a Congress that is on par with the latest consumer trends and developments in new markets.

“This congress is a congregation of industry leaders in the gem and jewelry field, it also serves as an opportune meeting for the members and non-members both internationally and locally to garner knowledge and expertise on new trends.”

Business leaders in Sri Lanka’s gem and jewelry industry have also bolstered co-operation to devise elaborate plans to host what they hope will be the best Congress to date.

“The unwavering support from both state and private sector participants has given the Congress a huge impetus and we are pleased to be on track to deliver a world-class Congress,” Chairman of the Sri Lanka Congress Committee, A.H.M. Imtizam said.

The congress themed “Sapphire and MORE” would bridge the gap between gem source and consumer, with focus on imparting knowledge about these rare gifts of nature so that the beauty and rarity of the gems are communicated to consumers.

The line-up of speakers includes the illustrious keynote speaker, David Schwartz, as well as gemstone gurus Richard Hughes, Edward Boehm, Ken Scarratt, and Dr. A. Peretti to name a few.

Fringe events of the ICA congress include a 7-day tour of Sri Lanka including visits to gem mines. A gem trade fair will also be held in conjunction with the main event at the same venue where over 50 companies will proudly showcase array of gemstones and jewelry, Vice Chairman of the show organizing committee, Juzar Adamaly confirmed.

Three sporting events will also be given prominence, they include a cricket, tennis and golf tournaments which will be open for members and non-members to take part in. Four gala events and a cultural show is also part of the enticing event.