The Jewels of the World Collection at Bonhams, Hong Kong 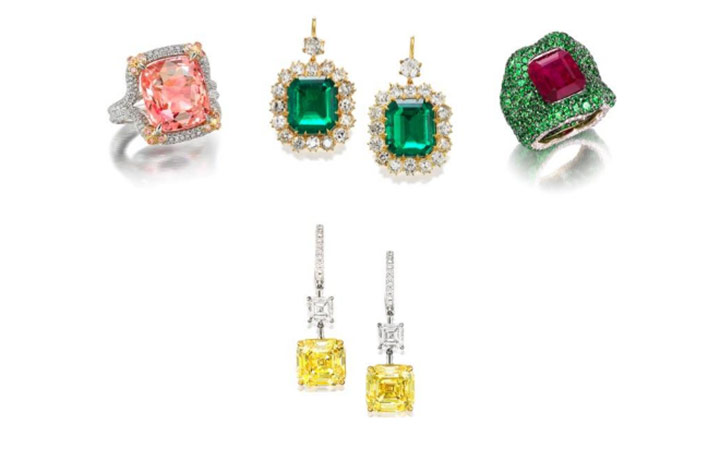 The largest collection of ‘best in class’ colored gemstones from around the world are to be showcased at Bonhams Hong Kong as part of its forthcoming Rare Jewels and Jadeite auction.
The carefully curated selection of gemstones – titled ‘The Jewels of the World collection’ – has been chosen based on their exceptional quality, rarity and beauty.

The selection includes Colombian emeralds, Burmese rubies and sapphires from Kashmir and Ceylon as these continue to be in the spotlight. It will also include gemstones from a number of other important regions that produce gems which are equally as beautiful and as rare. These regions include Kenya, Tanzania, Madagascar, Tajikistan, Afghanistan, Mozambique, Brazil and Australia.

Graeme Thompson, Head of Jewellery for Bonhams Asia, said: “As part of our first sale of 2017, we are delighted to present some of the rarest and most beautiful gemstones the world has to offer. “The increasing popularity of natural coloured gemstones has been driven by growing demand from around the world and interest in them is now widening to newer areas.

Many of the world’s colored gemstones have similar optical properties, such as Madagascar and Kashmir sapphires or rubies from Burma versus those from East Africa. Irrespective of their origin, the best examples of colored gemstones tend to have a limited production of fine material because the mines are finite and production will come to an end at some point, therefore these natural wonders are extremely rare and highly sought after.

Graeme Thompson adds: “At the moment, gemstones from these newer areas are relatively undervalued when compared to their counterparts from Colombia, Burma and Kashmir so now is a good time to buy because we expect comparative values to catch up as demand increases.”

Dr. Michael S. Krzemnicki, Director, Swiss Gemmological Institute SSEF, has written a special foreword which will appear in the Bonhams Rare Jewels & Jadeite sale catalogue. In it he says: “New important gem deposits producing gemstones of excellent quality have been discovered in recent years, and these can compete in every aspect with their famed ‘ancestors’. These new sources which have emerged include Madagascar, a treasure island of its own producing sapphires, rubies, and fancy sapphires in a wide range of attractive colors amongst other gems. Mozambique is a recent source of rubies of excellent quality and copper-bearing tourmalines of vivid colors, Tanzania for attractive pinkish red spinels and blue-violet tanzanite of exceptional clarity, Kenya with green tsavorite garnet and Zambia in East Africa for beautifully saturated green emeralds, just to name a few.

“Having analysed the most prestigious and exceptional gemstones offered today in the trade and at auction, I have to admit that I am still again and again amazed and astonished by the pure beauty of fine gemstones, regardless of their geographic origin. At the very end, it is all about looking at the gemstone, its saturation and vivid play of colors, the brilliance of its reflections, its clarity, and finally its individuality, also expressed in the subtle arrangement of internal inclusion features which may even add a layer of beauty for those who are willing and interested to be captivated by nature’s unique “fingerprint” in a gemstone.”

The sale, which will feature a total of 103 of lots, and take place at 3pm on 31st May 2017 at Bonhams Hong Kong Gallery, One Pacific Place.